A patient at the Melbourne psychiatric facility where a coronavirus cluster broke out alleges she was told she was delusional when she saw staff in personal protective gear, and asked if COVID-19 had been detected in the facility.

The patient, who has requested anonymity, said she was told people with her mental illness “see things” when she questioned if there was a coronavirus outbreak at the centre.

But she took a photo (below) of staff in protective gear to prove she wasn’t delusional. 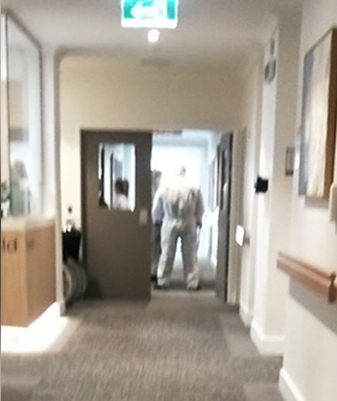 The patient was admitted to the Albert Road Clinic three days after the first COVID-19 case was detected.

There have now been 16 cases of coronavirus attributed to the clinic.

The patient’s father John (not his real name) told Neil Mitchell the way the outbreak was dealt with by the clinic was “a total cover up”.

“She saw people in suits taking patients out and cleaning rooms, and so on, and she asked if there was any coronavirus in the hospital,” he said.

“She was told ‘absolutely not … sometimes people get a bit delusional, and by the way, do you hear voices at all?”

“The thing that astonishes me is that this happened three days after the case was first noted in at the hospital.

“It was denied by a staff member and also by her psychiatrist.”

Several other patients have contacted 3AW Mornings to report they were kept in the dark about the outbreak.

The first case of COVID-19 was detected in the clinic on March 24, but the outbreak was not revealed to many patients until Neil Mitchell named the clinic a month later.

Shockingly, John* also says his daughter was offered a knife and given a recipe to overdose successfully by a nurse at the facility when she expressed suicidal thoughts.

“You go in there suicidal, and basically at risk … and you’re offered a knife, given a recipe for successful overdose, and then exposed to the world’s most lethal disease. It’s shameful,” he said.

3AW Mornings has contacted Ramsay Health Care, which operates the facility, for comment.

Press PLAY below for Neil Mitchell’s interview with John*.

Head of patient safety at Ramsay Health Care, Dr Bernadette Eather, says there was “absolutely not” a cover up of the coronavirus outbreak.

She said the people in PPE in the photo taken by the patient are paramedics who were called as a precaution after someone in the clinic became ill.

But Dr Eather says if the patient was told she was “seeing things”, that never should have happened.

“We would absolutely tell patients what’s happening … that’s really what should have been relayed.”

Ramsay Health Care is investigating the allegations and says staff are being trained to improve communication.

Press PLAY below to hear what Ramsay Health Care had to say about the allegations.