Back to school: Victorian students return to the classroom for first time in two months

Thousands of Victorian students will today walk through the school gates for the first time in eight weeks.

Banners and balloons greeted students at Lauriston Girls’ School upon their return this morning (below). 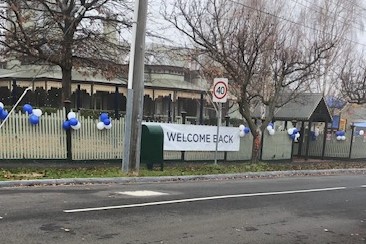 Prep to grade two, year 11 and year 12 students return today, while students in other year levels are set to return to school on June 9.

McKinnon Secondary College principal Pitsa Binnion said she’s glad VCE students will be back at school today, but she doesn’t think they were disadvantaged by their time spent studying at home.

“I think very little damage has been done,” she told 3AW’s Kate and Quarters, filling in for Ross and John.

“I wouldn’t have thought it was possible eight weeks ago.

“Obviously it’s not the same as being in the classroom but they’ve done a remarkable job and they’re really up to the same level as they were at this time last year.”

But Ms Binnion said school will be noticeably different for those returning today, with tables separated, extra hygiene precautions required, and staggered release from school.

“It’s going to be different but they’re going to look back at this when they’re older and say ‘my goodness, we lived through Year 12 in a pandemic!”