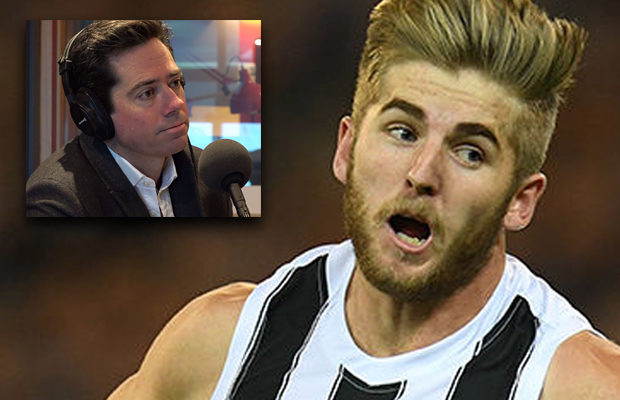 The boss of the AFL has refused to comment on ASADA’s investigation into a Collingwood player, and admitted the AFL website’s report on the matter was deleted over legal concerns.

Sam Murray’s career hangs in the balance after the 20-year-old Magpie allegedly tested positive for an illicit drug on match day.

He was a late withdrawal from the Port Adelaide game last week for what the club called “personal reasons”, and remains away from the club.

Murray could receive a ban of two years or more under ASADA provisions.

“I’ve got pretty strict obligations and confidentiality requirements so I really can’t comment.

“My advice is that I’m not allowed to comment on any part of the process as it plays out, and I’m sorry…”

The news broke on the AFL’s website and was followed by confirmation from Collingwood (full statement below).

McLachlan appeared surprised the Magpies were able to issue a statement — “I’ll be interested to see how all that plays out” — when he was gagged himself.

He told Neil Mitchell it wasn’t a mistake to break the story on the AFL’s website.

“We weren’t aware of it, clearly, when it went up.”

Click PLAY below to see what he said in studio

McLachlan said he was made aware of the article by his head of legal, whom he authorised to contact the editorial boss.

“They pulled it down (deleted the article) and changed some wording to satisfy the lawyers,” he said.

“But that’s what happens when you hire independent journalists.”

Collingwood has been informed that defender Sam Murray is under investigation by the Australian Sports Anti-Doping Authority (ASADA).

ASADA is leading the process and the timing of the investigation will be determined by ASADA.

“I would like to reinforce that Collingwood is unequivocally committed to the cause of eliminating drugs in sport,” said Collingwood Chief Executive Officer, Mark Anderson.

“We fully support all anti-doping policies and our athletes understand the rules in place. Collingwood has worked hard to develop a culture of professionalism and respect within its teams and we are making great progress.

“It would be inappropriate to pre-empt the outcome of the ASADA process.

“In addition to ensuring we comply fully with the ASADA process, we are also ensuring that we support Sam as a person. Whatever the outcome of the ASADA investigation, the welfare of a young man must remain a priority and we are committed to providing the support that Sam needs.

“We are not able to make any further comment until all of the facts are gathered, the investigation completed and a determination reached.”