The St Kilda defender collapsed during Sunday’s clash with Geelong.

“A number of things will go through any doctor’s mind.

“The first thing is going to be a cardiac event where the heart has gone out of sync and stopped pumping … that’s probably what it’s going to turn out to be.

“There are a number of examples of that in the AFL in the past, not many, but it happens in sport.

“It’s being really investigated today as an arrhythmia or electrical fault in the heart.”

He also shared his thoughts on Scotland’s Callum Hawkins, who collapsed during the Commonwealth Games marathon.

There’s been some criticism as to how the situation was handled. 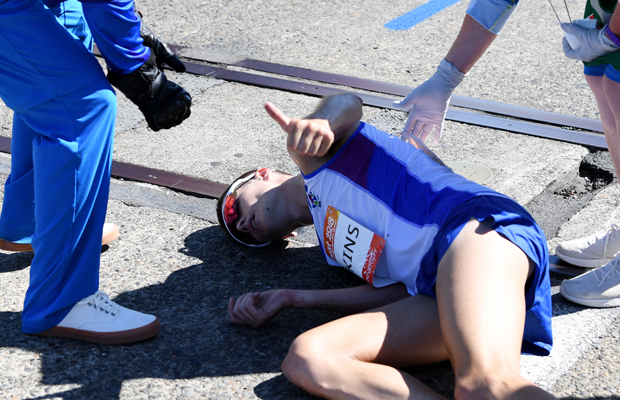 However, Dr Larkins said a number of things needed to be assessed.

“If you interfere with an athlete during competition you can disqualify them,” he explained.

“Now, when there’s a serious medical concern that will override it … he clearly wasn’t going to finish the race.

“My personal point of view is that he probably need intervention a bit sooner – he was clearly very distressed.”