Hawkins matches GWS for goals as Geelong storms to victory 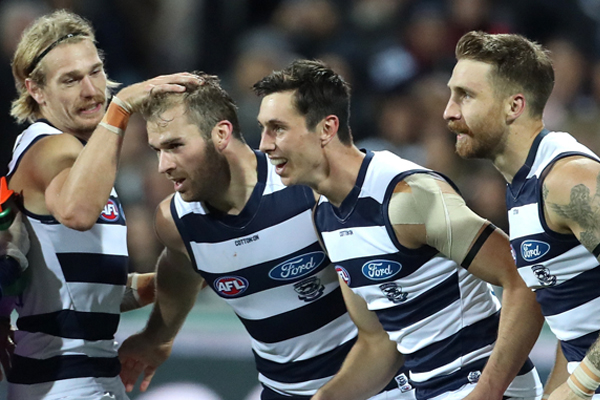 Crameri had played just two games since September 2015 due to injury and ASADA-imposed suspension.

He said it was a “great feeling” to be playing again.

“Especially on a Friday night, the guys put on a show,” Crameri said in the rooms.

Click PLAY for the full interview with Crameri in the rooms

It was one-way traffic at GMHBA Stadium, with the Cats running out winners by 61 points.

Matthew Lloyd said some of the Giants out there don’t cut it.

“Dylan Buckley: AFL isn’t cut out for him. Sam Reid: the time has probably gone that he should be in the team.

“You’ve got Lachie Keeffe trying to find a spot… probably not for him either.

“There no one in Geelong’s team who you think shouldn’t be playing at AFL level.

Lloydy said both teams have injuries, so that’s no excuse for the Giants.

“Even with injuries, you should still understand the system,” he said.

Geelong lead by 27 points at the main break.

The general play has been largely even, but the Cats have been far more efficient when going forward.

Tom Hawkins is the only multiple goal-kicker on the ground, with a pair.

The GWS coach told 3AW Football they’ve been winning without things going their way for a year.

“The issue we’ve had over the last 12 months is we are winning ugly,” Cameron said before the game.

“We’ve lost our way with our ball movement.

“Everyone’s going to have their opinion, what you can’t do is dwell on it.”

Geelong has made a late change tonight.

Zac Smith (back) has been replaced in the 22 by Rhys Stanley.

Geelong sits just outside the eight after a disappointing loss to Sydney last week.

The Cats led by almost four goals at the last change before being overrun.

GWS, meanwhile, are sitting pretty inside the Top 4.

But the Giants will have to overcome two more injury concerns, with Brett Deledio and Jeremy Cameron missing tonight.

No fewer than three players will make club debuts tonight: Stewart Crameri for the Cats;

Who will prevail down in Geelong tonight?