Geelong beats Bulldogs in a rollercoaster at Simonds Stadium 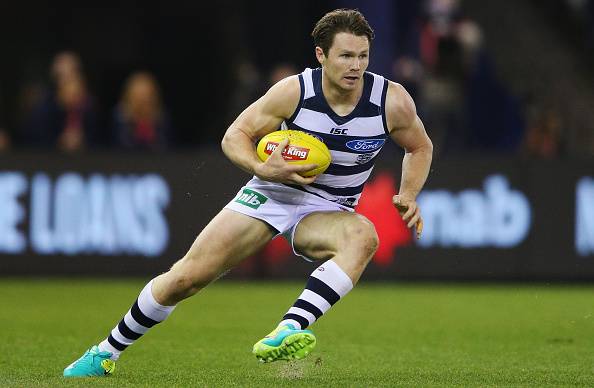 He said recent criticism of the team’s form had not gone unnoticed.

“We’re certainly not oblivious to the outside noise,” Dangerfield said.

“I’d be lying if I said I hadn’t read a few of the articles during the week with criticism about our form.

“Sometimes it’s good to use it as a bit of motivation.”

Dangerfield admitted he’s had sore ribs in the past few weeks, but he isn’t about to use that as an excuse for poor form.

“I think every player plays through varying degrees (of pain),” he said.

Geelong recruit Zach Tuohy spoke to 3AW in the rooms after his 28 disposals.

Even he was blown away by the Cats’ 134 tackles.

“I didn’t realise it was quite that many,” Tuohy said.

“But we knew we had it in us and it was quite satisfying finally put a four-quarter effort together.”

Geelong has snapped its losing streak with a 23-point win over the Dogs.

Geelong responded to last week’s poor tackling effort with ferocious attack on the ball-carrier, racking up 134 tackles on the night.

Matthew Lloyd said the Dogs’ lack of a ruckman was telling.

“When the game was there to be won, there were two beautiful taps from Zac Smith to Dangerfield for two goals,” Lloydy said.

Geelong leads by 26 points after a blistering second quarter.

The Cats booted 5.3 to nothing, with Harry Taylor kicking three goals for the quarter.

Patrick Dangerfield also has three goals, along with 23 disposals and nine tackles.

The Cats had 18 inside 50s to three in the second term, and 15 clearances to nine.

Geelong responded to last week’s tackle count of just 40 by racking up 71 in the first half.

“It’s amazing what attitude can do,” Matthew Lloyd said.

Click play for the half-time wrap with Lloydy and Shawry

It was a bruising first quarter, with several players feeling the heat early.

Doc Larkins reported that Joel Selwood (ankle) and Easton Wood (shoulder) will be able to play out the game, but the news isn’t as good for Nakia Cockatoo.

The young Cat has injured his right hamstring and could miss weeks.

“We probably didn’t get our hands on the ball enough (last week),” Enright said.

“We need to fix up the contest first and then fix up the outside from there.”

Before the game, Bulldogs assistant Daniel Giansiracusa told 3AW why Tom Liberatore has been dropped.

Giansiracusa said Liberatore is in the Bulldogs’ best 22 players, but needs to rediscover his form in the VFL.

“Even Libba admitted to me he’s not really happy with his inside game,” Giansiracusa said.

“All players go through a bit of a form slump.

“He’ll be back, bigger and better, pretty soon.”

Giansiracusa also said the Bulldogs will “some attention” into one of Geelong’s stars.

Geelong has made a late change ahead of the match.

Cam Guthrie (illness) has been withdrawn, with Jordan Murdoch coming in.

The Bulldogs are unchanged.

A lot of questions circle the Cats and Dogs after eight matches.

Hopefully, Friday night’s clash in Geelong will provide some answers.

There are big changes at the Kennel with Dale Morris and Robert Murphy coming back into defence, Tory Dickson and Travis Cloke bolstering the forward line, and Mitch Wallis returning from a long-term broken leg.

Tom Liberatore was omitted as one of five changes.

Lachie Henderson returns for Geelong, as does Scott Selwood as the tagger comes back in vogue.

Follow this cracking match-up with the No. 1 commentary team in the game on 3AW Football!