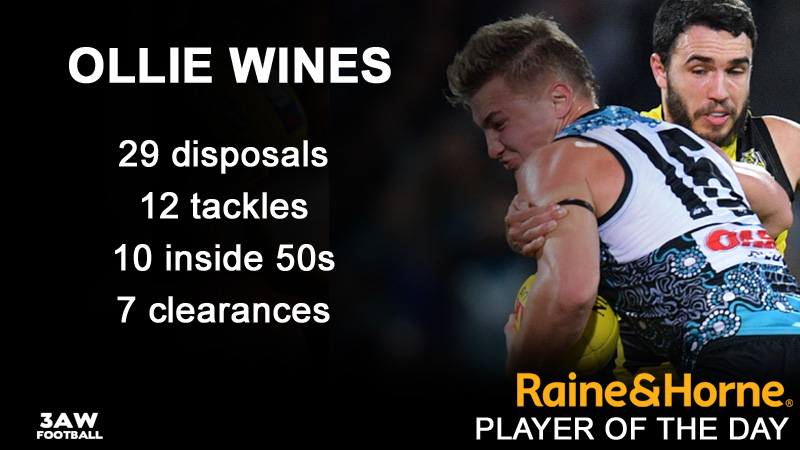 The Tigers had little options up forward despite Jack Riewoldt, while their midfield lacked depth without Martin.

Charlie Dixon battled it out with Alex Rance, and joined the boys after the game.

After Richmond kicked the first goal of the second quarter to make it four in a row, Port Adelaide steadied the storm from the center with the combination of Paddy Ryder, Ollie Wines and Chad Wingard.

Justin Westhoff has 16 disposals and kicked three goals for Port Adelaide, while for Richmond Jack Riewoldt and Shane Edwards both have two each.

CLICK PLAY BELOW TO HEAR THE HALF TIME WRAP

Matthew Lloyd and Jimmy Bartel were put to the test…name their All-Australian centre square combination.

Hear their selection’s below.

It has been a big week for Richmond’s players, with Alex Rance’s dive, Dustin Martin’s trip back home, and Anthony Miles’ first senior game of the year on the agenda.

Port Adelaide coach Ken Hinkley says their form has been quite “up and down” so far this season.

“We win a showdown by a kick, lose one last week by three points.

“We could’ve been just about anything and we probably are where we should be, just going ok.”

Hinkley said the inclusion of Jasper Pittard and Jack Hombsch was based on Richmond’s small forwards.

“We have found we were a bit tall in the past couple of weeks.”

Dwayne Russell says the state of the game next year will change under AFL Football Operations manager Steve Hocking.

“I think we will get more starting positions at the center bounce.”

Richmond will be without Dustin Martin for the first time since Round 22 2014, and it is only the fifth match he has missed in his career.

He is one of two changes for the Tigers, with Jack Graham omitted. In comes Jason Castagna and Anthony Miles, who dominated in the VFL last week with 44 disposals and three goals.

For Port Adelaide, Jasper Pittard comes in for Jack Hombsch.

These teams only played once in 2017, with the Tigers winning by 13 points and Martin best on ground. However they have only won two of their past six matches at Adelaide Oval since 2015.

Without Martin, this could be Port Adelaide’s best chance to beat the reigning premiers.