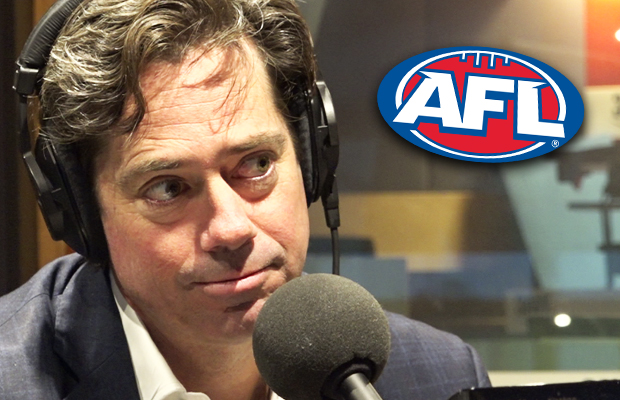 AFL boss Gillon McLachlan admits there have been some “weird” requests from players and their families in the league’s Queensland hubs.

But he stressed they were “outliers”.

McLachlan’s comments come after it was reported a “fed up” AFL had issued an edict to clubs over petty requests and demands.

“There has been some weird stuff but, as a general rule, the players, our clubs and their families are getting on and doing their bit and I’m very grateful,” the league chief executive said on 3AW Mornings.

In a news-packed interview with Neil Mitchell, McLachlan covered a range of footy’s burning issues.

He denied the AFL had “gone soft” on Collingwood by fining the club $50,000 ($25,000 of it suspended) after it emerged coach Nathan Buckley and Brenton Sanderson had broken hub protocols by playing tennis with two people from outside the group of approved club people.

“The other thing I’d note here is that it would probably have been different if it was a public venue where you couldn’t have been certain who they were playing with, but the fact we were able to be really clear with the two individuals and do a risk assessment on those meant they were able to be in isolation for only 24 hours and come back and coach.”

McLachlan said he may “get in trouble” for saying it publicly, but the “broad plan” was to squeeze the clash involving Essendon and Melbourne (which was postponed after Conor McKenna returned a positive COVID-19 test earlier this year) somewhere between rounds 14 to 16.

An investigation has been launched after Collingwood’s Isaac Quaynor had his leg sliced open by the boots of Sydney first-gamer Sam Wicks.

“The umpires don’t (check boots before games) because there are boot studders and multiple staff and clubs and individuals need to be accountable for not having dangerous footwear.

“I don’t know if he (Wicks) did, or didn’t, but they are the starting points.”

He also addressed the controversial standing down of AFL journalist Mitch Cleary at the weekend.

(After being offered a coffee at home).

“I didn’t plan that distraction, but it wasn’t bad,” McLachlan said with a laugh.