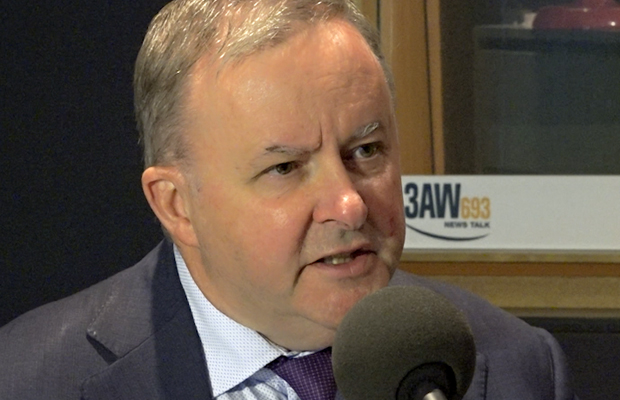 Those two men are the only two confirmed candidates for the job, following Saturday’s election loss.

It triggers a month-long campaign in which Mr Bowen and Mr Albanese need to convince party faithful who’s best to take the role.

Mr Albanese pitched his case to Neil Mitchell this morning, only moments after Mr Bowen officially declared his interest.

NEIL MITCHELL: You’re an old lefty — are you sure it won’t scare the horses?

MR ALBANESE: I think, Neil, those sort of labels are pretty irrelevant. I think with me what you see is what you get. I consider myself ‘Old Labor’.

Under the original plan, some pensioners and self-funded retirees would lose income from share investments and voters punished Labor over the policy at Saturday’s federal election.

“One of the options that could have been considered is putting a cap on it,” he said.

“You could have a combination of that and grandfathering as well.”

Meanwhile, Mr Bowen also addressed the franking credits, which he called the “elephant in the room”.

“It is true it is my policy; I designed it,” Mr Bowen said at press conference announcing his nomination for the leadership.

“I don’t accept it’s why we lost the election in its entirety.

“We also lost the election because of policies we don’t have, like a death tax. I had more people raising a death tax with me on polling booths than franking credits.

“I woke up on Sunday morning devastated … but also deeply respectful of the verdict of the Australian people.

“What I didn’t waking up thinking on Sunday morning was that all of the sudden the tax system is fair; I didn’t wake up suddenly on Sunday thinking we don’t need to spend any more money on health and education.

“I didn’t wake up on Sunday morning thinking we should no longer worry about giving first-home buyers a go, a level playing field.

“These are the values which underpinned all those policies.”

NEIL MITCHELL’S RESPONSE
He doesn’t get it. He still doesn’t get it.
He didn’t understand, or refused to accept, that average people who had made plans for their retirement … were going to get hurt.
They were collateral damage.