It’s over: Alan Richardson steps down as St Kilda coach 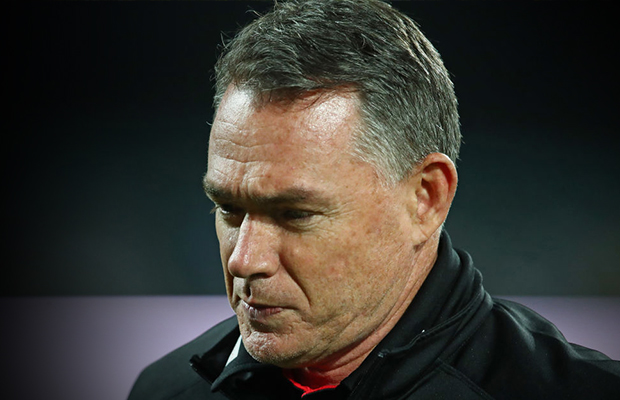 The club confirmed on Twitter late Tuesday morning that the under-siege coach had stepped down.

Assistant coach and former Carlton senior coach Brett Ratten will coach St Kilda for the rest of the season.

“The decision comes after many months of extensive discussions with CEO Matt Finnis and the board of directors, culminating on Monday afternoon,” a St Kilda statement read.

It was on Monday that the 3AW Rumour File, which was first to predict the timing of Brendan Bolton’s departure from Carlton, was told a coach’s sacking was imminent.

After a positive start to the season, the Saints have lost their past four matches and suffered defeat in nine of their last 11 games.

St Kilda lost to Geelong by 27 points in a dogged performance at the weekend.

Richardson, who inherited a struggling list, has failed to lift the club to finals after six seasons at the helm.

The decision comes after many months of extensive discussions with CEO Matt Finnis and the board of directors, culminating on Monday afternoon.

St Kilda President Andrew Bassat thanked Richardson for his contribution to the club over the past six years.

“On behalf of everyone at the football club, from the board to the players, staff and supporters, I want to thank Alan for his commitment and contribution,” he said.

“I also want to extend our gratitude to Alan’s wife Jo, and boys Lachey and Ben, who have allowed the St Kilda family to share their husband and dad during this time.

“Alan brought great integrity, knowledge and experience to our football program, and under his leadership, the foundation for future success has been laid.

“He inherited his role at a difficult point in the club’s history, developed the young players now beginning to make their mark, took the club to the cusp of two finals appearances, and in recent times, showed great resilience in the face of adversity.

“Alan’s selflessness and focus on what is right for the playing group and club has always been immense, but it’s perhaps been best demonstrated in the past two days through his decision to step aside and allow the club the time and space to find the next coach of the St Kilda Football Club.

“There is no escaping the significant setbacks we have faced this year in regards to player availability, and these, as you would expect, have been taken into account in our decision.

“Ultimately, after six years under Alan’s leadership, the team performance and the position in which we find ourselves isn’t where it needs to be.

“This responsibility doesn’t just rest with the senior coach, and indeed we feel that the performance of Alan and the rest of the coaching group in adverse circumstances this year is to be commended.

“However, after significant consideration, we believe the time is right to introduce a new voice to oversee the next stage in our development and drive us forward.”

Bassat said Brett Ratten would assume senior coaching responsibilities for the remainder of the season while the club undertakes a rigorous process to find the best coach to lead the club to a second premiership.

“I thank Brett for accepting the role, and I know he and the other experienced members of our coaching team are determined to finish off the year in a manner befitting the commitment of our supporters,” he said.

“I also want to address the rigorous process we will now begin to find the next coach of the St Kilda Football Club.

“Speculation the club has a pre-determined position on potential candidates should be completely disregarded.

“I cannot overstate the value everyone at the football club places in strong governance, and any suggestion otherwise is simply unfounded.

“We will first put together a selection committee, which I will chair, to evaluate all possible options for the role.

“As our members would expect, we will be incredibly thorough and open-minded as we search for the right senior coach to lead us to a second premiership.”