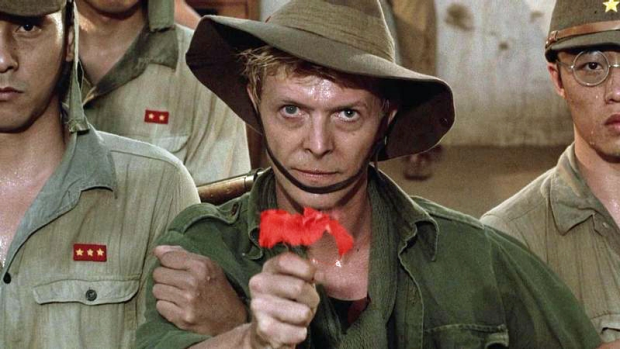 A GIANT PASSES ON

The death of David Bowie came as a blow to everybody. Having battled cancer for 18 months, Bowie passed away this week, age 69. You could easily spend the next year paying tribute to his contributions to culture and still not get through it all.

As a musician Bowie strode through the decades like a giant, his songs often commenting on the culture he was influencing. Shifting personas and in a constant state of reinvention, Bowie embraced the concept of pretention in its purest artistic form to produce music that was forever inventive, challenging and original.

Through characters such as Ziggy Stardust and Aladdin Sane, he was the first to fully engage with the notion of artistic ‘image’, making him the most instinctive stylist in modern music.

But Bowie also had an eye. A decade before it was fashionable, Bowie conjured stunning images through his music videos and concert films. Clips such as Heroes, Blue Jean – part of a 20-minute short film – and Ashes to Ashes spoke clearly of Bowie’s long-cherished desire to become a film director.

Alas, this never came to pass. It remains the one disappointment in David Bowie’s brilliant legacy.

Bowie proved himself a fine and – unsurprisingly – versatile actor in films such as The Man Who Fell to Earth, Absolute Beginners, Just a Gigolo, Basquiat, The Hunger, Labyrinth and his personal favourite Merry Christmas, Mr Lawrence.

His music has fuelled scores of TV and movie soundtracks – take the use of the The Heart’s Filthy Lesson over the closing credits of Seven and Putting Out Fire in Cat People as high-water marks – and will no doubt continue to.

Yet there will always be that David Bowie-shaped hole in the modern history of film. One can sense from his work what Bowie might have done with sci-fi or fantasy, though his sense of humour could have lent itself to the comedy and satire. As for his odes to love, one wonders why he never did a cheesy rom-com.

That Bowie never fully explored the cinematic side of his artistry only deepens the sadness of his passing.

As if that wasn’t enough to cope with, the great stage & screen actor Alan Rickman also died this week, age 69, also from cancer. Famous for his portrayal of the villain Hans Gruber in Die Hard, Rickman was also known for: Robin Hood; Love Actually; Truly Madly Deeply; Harry Potter (as Professor Snape); The Butler (as Ronald Reagan); Galaxy Quest; and Quigley Down Under. As a director he made The Winter Guest (1997) and A Little Chaos (2014). He will soon be seen in the thriller Eye in the Sky.

Film stock-loving director Christopher Nolan (Interstellar; Inception; The Dark Knight) will next film the World War II epic Dunkirk, about the evacuation in 1940 of Allied troops from the French beaches after a failed operation. Based on his own screenplay, the film will star Tom Hardy, Mark Rylance and Kenneth Branagh and be filmed in the old-school, defiantly non-digital format of 70mm. It’s slated for release mid-2017.

After the exhaustion and expense of making Mad Max: Fury Road, which began its long road to life 20 years ago, director George Miller has decided to call it quits with the character he created, at least as a director. He may well produce Mad Max 5, but the stress of having to relocate the Fury shoot from Australia to Africa after the Outback location of Broken Hill bloomed with flowers and grass proved a bit too testing on his nerves.

Hot item from the Yet More Star Wars News department: The stand-alone Han Solo film is set to start shooting in about a year but, says Variety, the hunt is on in earnest right now for the actor to play the young Solo, possibly so he can put in an appearance in Rogue One, another Star Wars stand-alone movie currently being shot by director Gareth Edwards (Godzilla). Among those taking their place on the casting couch are: Miles Teller (Whiplash); Ansel Elgort (The Fault in Our Stars); Dave Franco (21 Jump Street); Scott Eastwood (son of Clint); and Logan Lerman (Percy Jackson). The film will be directed by Phil Lord & Chris Miller (The Lego Movie) and written by Star Wars veteran scribe Lawrence Kasdan.

The Leonardo diCaprio survival epic The Revenant opened strongly at #2, taking $5.9 million on 248 screens, while Star Wars: The Force Awakens remained at #1, taking another $7.1m for a four-week total of $82m. The bad-girl comedy Sisters (#3) did nicely, earning $4.8m on 290.