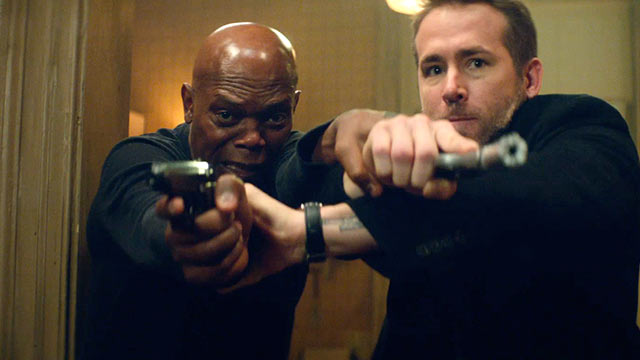 No time to talk: Sam Jackson and Ryan Reynolds in the ripper action-comedy The Hitman’s Bodyguard

Provided you’re not going to drive or operate heavy machinery, a fun game to play while enjoying this high-voltage, splendidly mounted action comedy is to have a single drop of booze for every time Samuel L Jackson drops his signature f-bomb. By the end of the film you’ll be lucky if you can walk.

Jackson’s elongated self-parody of a performance is but one of the many loud delights of this typically over-plotted multiplex programmer in which he teams up with the energetically daffy Ryan Reynolds (Deadpool).

With fireballs, gun fights and fast cars at every turn, this is an above-average slice of tongue-in-cheek B-grade movie mayhem, with the two leads breezily matching the love/hate spark of Mel Gibson and Danny Glover in the Lethal Weapon films.

Hmm. Another case of Australians being the main key-turners of major American films. Makes you wonder – couldn’t we be making that sort of stuff here for them to do?

What do you do with a sassy seven year-old girl blessed with a brain that can outrun a calculator? Develop her gifts by sending her to a rarefied learning environment, or keep her grounded by letting her mix with ordinary kids in an ordinary school?

That’s the poser at the heart of director Marc Webb’s sweet-natured, button-pushing custody drama as a working class man (Chris Evans) tussles with his well-meaning but over-bearing mum (Lindsay Duncan) over what’s best for his adorable niece Mary (McKenna Grace in a winning, career-igniting performance) who, despite her smarts, is confused about how she fits into the world.

Warm, life-affirming and mounted on a small scale, the film, written by Tom Flynn, boasts a rather telling pedigree. Webb made the Amazing Spider-man films and Evans, of course, is best-known for Captain America and The Avengers. It’s a neat irony that at a time when multiplexes are congested with an over-supply of indistinguishable superhero fodder and we yearn for more heartfelt fare that such a lovely film as Gifted should come from two people neck-deep in the superhero swamp.

It’s also a good stream search-prompting reminder that Webb directed the wonderful romance 500 Days of Summer and that Evans did fine work directing and starring in Before We Go (with Alice Eve).

Wild times ensue as inhibitions drop, but along with the non-stop cursing and talk about sex come the conflicts their separate lives now bring to the table.

Lisa is the hard-working suburbanite who is aghast at the Id-driven excesses Dina thrives on, while Ryan’s troubled life as a TV celebrity with a cheating husband could be a potential windfall for Sasha, a struggling online gossip monger who has to confront whether she is a writer or a hack.

It’s another Bridesmaids-inspired stumble through the tropes of bad-girl comedy, which includes the mandatory set-piece involving the expulsion of bodily waste (and it is very funny) and plenty of blue talk, which is now a regular, though not defining, feature of female comedy.

The four leads bounce off each other with boisterous ease, their voices almost as loud as their dress sense as they generate just enough comic energy to compensate for the film’s  inordinate length.

Like most American comedies today, Girls Trip clocks in at about 20 minutes too long, mainly because a lot of the points about friendship and loyalty are hammered over and over. That said, the film’s admittedly self-conscious message to young girls about self-respect does provide a good payoff to an over-cooked story.

Amidst all the shenanigans, Kate Walsh (Private Practice; Grey’s Anatomy) proves to be a major treat, stealing at least one scene where she gets told not to adopt any hip “black girl” mannerisms. It’s a small pity more wasn’t made of her in this very satisfying serving of girl-vs-girl comedy.

While it’s nice to praise a movie for good intentions it’s what ends up on screen that matters. In the case of Ali’s Wedding what begins with a solid premise and the promise of a cross-cultural rom-com descends into a scrambled, sexist mess.

Iraqi-born Ali (Osamah Sami, upon whose experiences the movie is based, and who co-wrote the screenplay) lives a quietly discontented suburban life with his Muslim family.

He’s got the hots for Dianne (Helana Sawires), a surly girl he attempts to pick up at the local mosque. Like her, he’s sitting an entrance exam to medical school, but unlike her he carries the traditional weight of expectation from his father (Don Hany), a softly spoken leader and advisor to his community.

Faced with a poor exam result, Ali succumbs to pressure by fibbing his way into university, complicating his situation no end, both with his euphoric family and with Dianne, who actually scored higher than he says he did. Ali also has a rival to contend with who suspects his claim to academic brilliance might be bull.

Director Jeffrey Walker (Dance Academy) does a very good job setting up the dynamics of a story about adolescence, independence and defying convention to be your own person.

But that doesn’t happen. Despite its tricked-up packaging, the story operates mostly within the bounds of Islamic tradition, which saps the life out of the main characters.

What’s most egregious about Ali’s Wedding is its portrayal of women, who are happy to put up with a segregated place of worship – sermons are delivered from the male section to the female section via a live video feed! – and to have their lives determined by the whim of the male characters.

This results in Dianne shrinking rather than growing as a character. Bizzarely, the trajectory of her arc blazes in reverse; she goes from being a strong-willed, intelligent, independently minded woman to a meek, subjugated girl who needs permission from her dim-witted dad to live her life.

As for the supposed comedy relief offered by the sex-crazed community elder with three burqua-shrouded wives, it’s truly wince-inducing stuff and qualifies the film as one of the most sexist in a long time.

There was a much better, barely seen 2015 Aussie romantic comedy called Alex and Eve that dealt with similar issues but in a far more progressive, dramatically satisfying fashion. It recognised both the value of cultural traditions and the need for them to adapt to the larger society in which they exist, that they are a part of it not apart from it.

Ali’s Wedding also stands in very stark contrast to the popular, barbed comedy of The Big Sick, which involves a Muslim man (American comedian Kumail Nanjiani) openly challenging the moral and social strictures of his parents’ religion, and turns out to be all the better for it.

Despite the promise offered in its first reels, nothing that interesting happens in Ali’s Wedding.