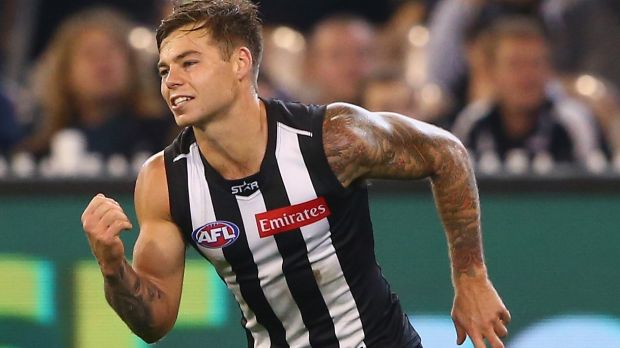 Daicos said his adrenaline had been pumping watching the game.

“My advice to him was ‘don’t be a static target, be busy and keep moving’,” Peter said.

“Considering his first game, I thought he got the ball and he was clean.”

But despite the win locking the Cats into the Top 4, Stewart isn’t looking beyond Round 23.

“We’ll get through GWS first, then we’ll ramp up to finals,” he said.

Stewart said he sometimes shakes his head at the skills of star teammate Patrick Dangerfield.

Click play to hear from Stewart in the rooms

Geelong has overcome a dogged Collingwood to win by 11 points.

The result cements the Cats in the Top 4.

Matthew Lloyd said the Pies put in a good effort, but once again let themselves down with ball use.

“They lose the same way week in week out: competitive but not good enough with their ball movement,” Lloydy said.

Click play for the full-time wrap with Lloydy and Lethal

Collingwood leads by three points at the main break.

The Pies led by as many as 28 points before the Cats kicked into gear.

“They’ve got stars down there – it’s just a matter of going (forward) more aggressively,” Lloydy said.

“Adam Treloar has had four inside 50s but I couldn’t recall any of them being damaging.”

Beitzel, who led 3AW’s football call team for 16 years, passed away during the week.

Collingwood’s minuscule finals hopes were extinguished by the Power last week, and the opposition only gets bigger on Saturday.

But don’t think the Pies will let the Cats have it easy.

The Pies could be playing to save their coach – and can play with the freedom of a team without expectation.

Can they make it four in a row against Geelong? Or will the Cats take a giant step towards a Top 4 finish?

Follow every moment of the clash with the No. 1 commentary team in the game on 3AW Football!