Cats win as Geelong and Hawthorn play out another epic 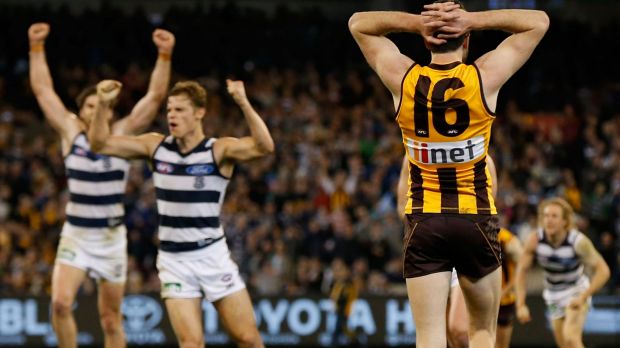 The match-winner Patrick Dangerfield spoke to 3AW after his five-goal performance.

Dangerfield said he’s proud of his performance through injury.

He said his foot is sore, but he’s hoping to play against his old side Adelaide next week.

“I’ll get into the City of Churches and say a few hymns,” Dangerfield said.

He also shared a bit too much information about an incident involving his newborn son George on the morning of the match!

Click play to hear from Dangerfield in the rooms

Geelong has won another classic over the Hawks.

The Cats led by 10 points with half a minute left before the 300-gamer Luke Hodge sent one home from 50m.

In the final 15 seconds, the Hawks went forward from the centre bounce but missed a late chance to win it, leaving Geelong three points in front.

Isaac Smith – who missed a chance to beat Geelong after the siren in the 2016 Qualifying Final – was again the culprit.

Doc Larkins has had a busy half, with Dangerfield (foot), Cam Guthrie (concussion), Jordan Murdoch (hamstring), and Shaun Burgoyne (thumb) all picking up injuries.

Doc said Dangerfield will be carrying his injury throughout the game.

Hawthorn leads by five points at the main break.

Matthew Lloyd said Geelong’s efficiency in attack has been important.

Lloyd said Dangerfield’s effort playing through injury (see below) has been big.

Geelong star Patrick Dangerfield is playing through a leg injury after copping a fair hit from Jarryd Roughead.

The Brownlow Medalist is camped in the forward line, with Doc Larkins saying he will struggle to play out the game.

Click play to hear how the drama has unfolded

Hardwick, Brand, Burton, Heatherley, and Sicily are the names listed alongside the legend Luke Hodge.

The five of them have played a combined total of just 93 games.

Geelong has made two late changes for the game.

Andrew Mackie (wrist) and Scott Selwood (hamstring tightness) have been withdrawn, with Sam Simpson and Zach Guthrie taking their places.

For those who have been living under a rock, it’s Luke Hodge’s 300th game this week.

And who better for the Hawthorn legend to come up against than his great modern rival, Geelong.

With the Hawks still holding out hope for a finals berth, and the Cats needing to solidify their spot in the Top 4, this is a true 8-point game.

The stage is set for another Cats-Hawks classic – and 3AW Football has the very best team to bring you the action!