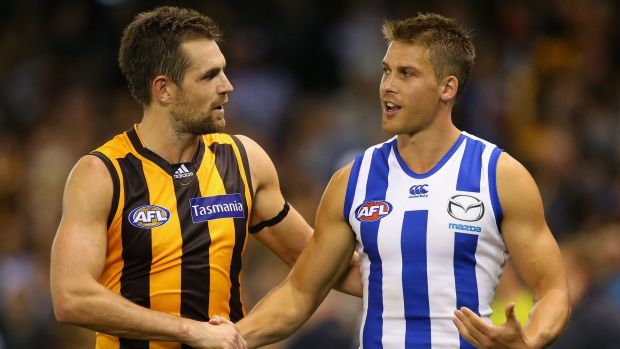 Hawthorn has won by 27 points.

Luke Breust booted four goals, while Tom Mitchell did what he does best, racking up 35 touches and five tackles.

North ruckman Todd Goldstein is having a stinker.

Goldstein has had just four disposals to three-quarter time in an unfamiliar role of a key forward.

Compounding matters for Goldstein is the fact that fellow ruckman Braydon Preuss is having a great day.

Richo said he could be a trade target.

It’s one-way traffic as Hawthorn has opened up a 33-point lead.

“We gave him right up until the last minute,” Scott said.

“It’s the same injury that kept him out a few weeks ago.”

Scott said Ziebell will need surgery after the season.

Hawthorn assistant Brett Ratten spoke to 3AW before the game.

He said Jaeger O’Meara is still a chance to return to the senior team in 2017.

O’Meara made a blistering return in the VFL on Saturday, racking up 29 touches and kicking three goals in just three quarters of the clash with Essendon.

“We’ll just wait and see how he pulls up,” he said.

Ratten said the club expects to make a call on O’Meara by Wednesday.

Jack Ziebell is out, Cam Zurhaar is in.

Brett Ratten: “It’s the first time ever a player whose name starts with Z has replaced another.”

North has made a big change before the game.

Jack Ziebell is out with a foot complaint, with Cam Zurhaar coming in.

Richmond legend Richo will be calling today’s game in a Geelong jumper.

The rhetoric from Hawthorn would have you believe they’ve given up on 2017.

But their team selection suggests otherwise.

The Hawks have only strengthened their side, with the return of Luke Hodge from suspension their only inclusion.

If they beat North (and Carlton and the Bulldogs), the Hawks can still make the finals if results fall their way.

But North were beyond poor against Collingwood last week, booting just one goal in the first half.

Will they respond in Launceston and officially end the Hawks’ season? Or can Hawthorn keep the flicker of hope alive?