Hawthorn farewells Hodge with victory to end the Bulldogs’ season 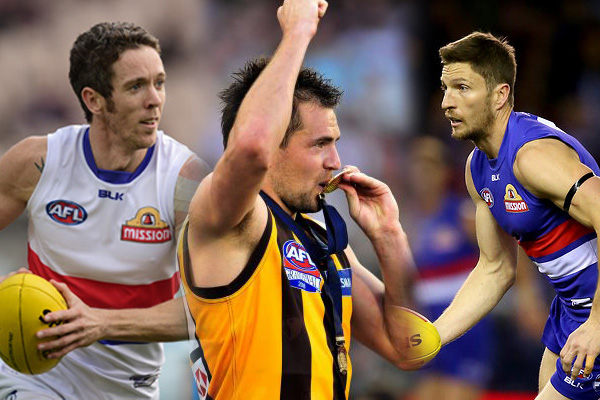 Hawthorn has won by nine points to end Luke Hodge’s career with a win.

However, as the result ends the Bulldogs’ season, it means Bob Murphy and Matthew Boyd’s careers don’t end on a happy note.

The Bulldogs are the first reigning premier to miss the finals since Hawthorn in 2009.

He said Alastair Clarkson is committed to making each person on the list a better player.

“You want to repay the faith he has in you,” Josh said.

“I just wanted to win for him and do my best every time.”

Despite the Bulldogs wearing their normal blue strip, the umpires are wearing light blue tonight.

And the fans have noticed:

Why oh why are the umps in blue? One team wearing blue! Can’t see them on the big telly!

#AFLHawksDogs what genius dressed the umpires in blue? @afl

Umpires in blue for the first time in ages. Dogs wear….blue. This should be fun. #AFLHawkDogs

The AFL umpires are wearing blue this round to raise awareness for OPSM charity partner OneSight. #AFLHawksDogs

Bulldogs assistant Daniel Giansiracusa spoke to 3AW before the game.

He fired back at Sam Newman’s comments about his former teammate Robert Murphy on The Footy Show.

Newman said Murphy had taken too much credit for the 2016 premiership, which he didn’t play in.

“I don’t watch the show, I don’t know of many people who do,” he said.

The emotion will be pumping on Friday night as the Hawks and Dogs send off three modern legends.

Hawthorn’s triple-premiership captain Luke Hodge will bid farewell, while Rob Murphy and Matthew Boyd will almost definitely line up as Bulldogs for the last time.

Once the ball is bounced, the Dogs are the only side of the two who can still make finals, but a lot would have to go right.

Can the Doggies keep the dream alive? Or will the Hawks make it the end of the road for Murphy and Boyd?