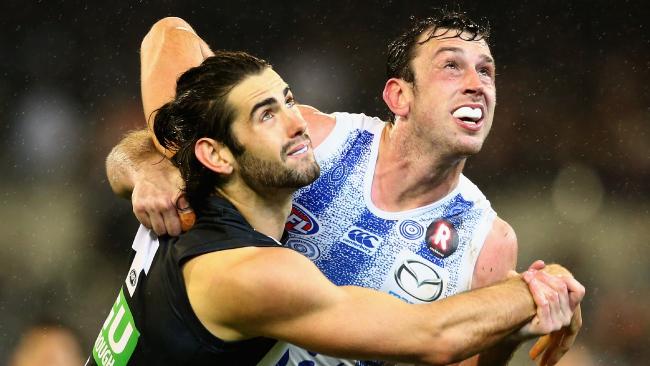 You can also still stream from the AFL app and website as per usual.

Stars Taylor Adams and Jack Ziebell spoke to 3AW in the rooms after the clash.

“There was no malice in what he did,” Adams said.

“Deep down at heart he’s a really soft bloke.”

Ziebell suffered a minor injury during the first half, but soldiered on to kick five goals.

He said the medical staff just had to be cautious.

“There’s a few important things under the ribcage,” Ziebell said.

Collingwood has won by nine goals but, in truth, it was a poor match.

Disposal efficiency was poor all night as the clanger count mounted.

Jarryd Blair finished with three majors for the victors, while Adam Treloar and Taylor Adams were typically prolific in midfield.

Jack Ziebell played a lone hand for North, booting five goals after injury forced him into a forward role.

Click play to hear the injury wrap with Tiff Cherry

Collingwood leads by 26, but it’s been a poor match.

Fans were vocal on social media about the quality of the play:

@afl I want my money back! #AFLNorthPies

#AFLNorthPies for the love of god i hope the kangas are tanking and are not actually this bad. #loosingmymind

This game is an abomination. #AFLNorthPies

There was a moment of controversy, however, when Ben Brown left the field on a stretcher after a strong Brodie Grundy tackle left him dazed.

But he said Grundy’s tackle looked better than Dangerfield’s.

“He’s got the ball for the majority of the tackle,” Harf said.

“It’s much more of a football action. It was less unreasonable in the circumstances.”

North has made a late change tonight.

Jy Simpkin is withdrawn, with Josh Williams his replacement.

The Roos and Pies may not be finals-bound, but both sides have plenty of reasons to keep winning.

With the pressure building on their respective coaches, every set of four points is invaluable.

Follow every moment of this clash with the No. 1 commentary team in the game on 3AW Football!