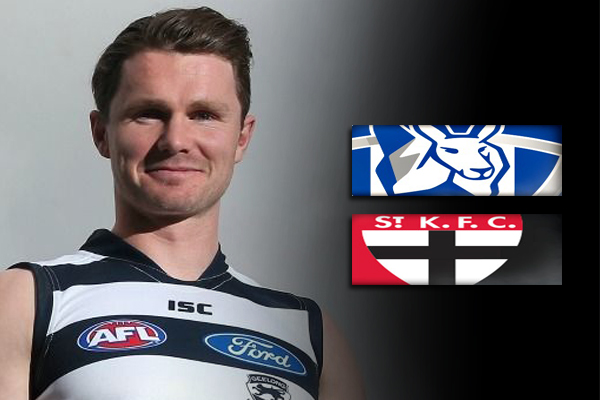 He said he’s happy for Jack Steven to be tagged out of a game.

“When he’s getting tagged, it frees someone else up,” Richardson said.

“It sounds impersonal, but I don’t care about individuals. I care about the team.

“If we’re 36 points up at half time and one of our better players hasn’t had a kick, I’m happy with that.”

Steven had just 16 disposals after being shut down by young Roo Declan Mountford.

Richardson also said he doesn’t want the AFL to do away with runners.

St Kilda has won a forgettable game by 17 points.

The game never reached any great heights, with Matthew Lloyd saying he found it tough to find five players to give votes to.

“I struggled to find 5 players…”

Patrick Dangerfield said St Kilda could have used a percentage-booster after leading by more than six goals at half time.

“When the competition is so close, it’s one that got away for St Kilda,” Danger said.

Click play for the full-time wrap with Danger and Lloydy

St Kilda leads by 38 points at the main break.

Jarrad Waite kicked the opening goal, but the Saints have kicked eight of the nine goals since that point to open up a commanding lead.

It’s been a scrappy game with both sides committing numerous skill errors.

Dwayne Russell said North’s effort on the night they celebrate Boomer Harvey is a “disgrace”.

Click play for the half-time wrap with Patrick Dangerfield

He spoke about the decision to retire Brent Harvey’s No.29 jumper.

“Of course it was a unanimous decision,” Buckley said.

He said Jack Steele had “dropped off” over the last couple of weeks, which led to him being omitted for this match.

“He hasn’t been as damaging as what he was in the early part of the season,” Kingsley said.

North Melbourne has made a late change tonight.

Rebounder Jamie Macmillan (hamstring tightness) has been withdrawn, with Jed Anderson coming in.

It’s a tipsters nightmare as the Saints and Roos clash under Friday night lights.

Both sides are vibrant, exciting, and full of potential.

But both are equally able of underwhelming on the wrong day.

With both sides holding onto hope of a finals berth in 2017, one thing is for sure: there’ll be no shortage of motivation when the first ball is bounced.