News Corp have this week reported North Melbourne are prepared to offer Martin up to $1.5m per year until 2024.

Lloydy said any such contract would be too long for a player approaching 27.

Dwayne: So you think it’s irresponsible?
Lloydy: I think it is.
Dwayne: I agree with you on that.

Click PLAY to hear the full discussion around Dustin Martin’s future, and this question from Lloydy – “Why do we keep hearing about North Melbourne’s offers?”

While Lloydy was pointing to age, Dwayne said Martin wasn’t marketable enough to demand such a contract.

“To me, he’s not a Patrick Dangerfield who’s going to get you millions back in revenue through doing media, endorsing products,” he said.

“We had him on Fox Footy last week post-game, and he gave Brad Johnson nothing.

“He didn’t even try to fake enthusiasm well enough.” 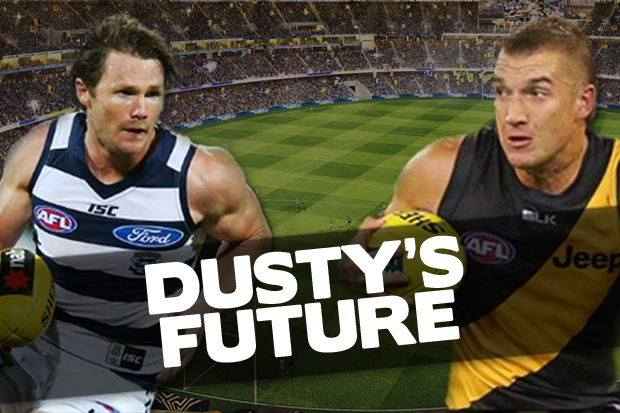