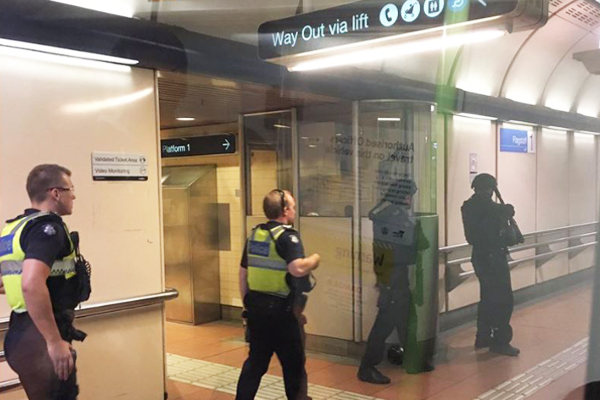 Victoria Police revealed the “suspicious behaviour” which sparked mass evacuation at Flagstaff station on Thursday morning was a busker with an instrument bag, not a gunman with a rifle.

Police say the man doing “breathing exercises” to prepare for his act, holding a bag containing a didgeridoo.

Will Austin, who is a part of an Indigenous organisation called Yarn Bark told Tom Elliott he was “swarmed by police” at the station this morning, but that he was simply carrying a didgeridoo.

The Chief Commissioner told Neil Mitchell what he found concerning is that train drivers were telling passengers there had been a gunman sighted, without confirming that as fact.

“We need to be really clear about communications we put up.

“We don’t want people reacting in a way that might put their safety at risk.”

The emergency at Flagstaff station was cleared just before 9.30am.

The Chief Commissioner told Neil Mitchell the Critical Incident Response Team were called in after passengers spotted what was believed to be a rifle case.

“The team conducted a search of the train and were after that content that there was no firearm on the train,” CCP Ashton said.

Trains have been given the all clear to stop at city loop stations.

The emergency at Flagstaff Station now all clear. Police told @metrotrains at 0859 that it could re-start through the loop now. In a moment @GrahamAshtonCCP ON AIR with @3AWNeilMitchell – all the details.

The drama begun unfolding just before 8.30am, when trains were stopped and passengers were ordered off city loop services.

The station was evacuated and area searched.

“The train driver came over and said there was a man with a firearm at Flagstaff and police have asked the station be closed,” Naomi said, who was sitting on a train at Richmond station.

⚠️UPDATE 9:03am: Timetabled City loop services have resumed running after @VictoriaPolice have the ok to run trains. See https://t.co/fE9E9Hyp10 for live updates.

The scene outside Flagstaff station at the moment, lots of police in attendance @10NewsFirstMelb pic.twitter.com/HOZC7rnuTT

BREAKING: TRAINS HELD UP AT FLAGSTAFF STATION DUE TO THREAT, ALL SERVICES HAVE CEASED, POLICE ARE HOLDING RIOT SHIELDS pic.twitter.com/yam71Xjz5O

HUNDREDS OF PASSENGERS HELD UP BY THREAT IN FLAGSTAFF STATION, POLICE SURROUNDING PLATFORMS 3&4, NO FURTHER INFORMATION HAS BEEN GIVEN pic.twitter.com/7G0i3Rac7z