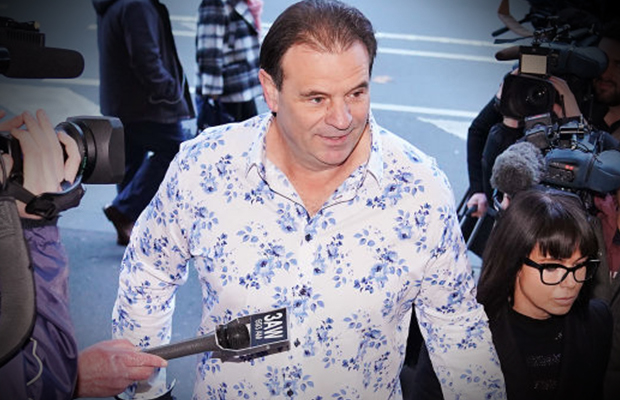 The Victorian CFMMEU chief has been under pressure to leave the party since being found guilty of harassing his wife.

Today he withdrew an appeal against moves to expel him, attempting to turn the tables on Opposition Leader Anthony Albanese by claiming his decision to “quit” the party was driven by an inability to support the Labor leader. (full statement from John Setka below).

“It’s been important that we demonstrate that Labor’s values as a party are greater than any individual, and that we’re prepared to stand up for those values,” Mr Albanese said.

“I think that this is a good outcome.”

‘I want him out’: Click PLAY to hear Anthony Albanese explain why he wanted Mr Setka kicked out of Labor back in June

My decision to quit the Australian Labor Party after 15 years has – everything – to do with Anthony Albanese.

This is a personal decision I have made; it will not affect The CFMEU VIC / TAS branch’s ability to advocate within the Labor party for better policies on behalf of CFMEU members and working Australians.

The Opposition Leader has waged a very public campaign to have me expelled from the party, based on false allegations motived by old-fashioned political payback.

While they have taken a personal toll on me and my family, the dirty tricks directed at me are not the reason I have decided to hand in my party membership card.

The reason is simple: I cannot continue to be a member of the Labor Party while Anthony Albanese is its leader.

Mr Albanese is selling out Australian workers and turning his back on the values that underpin both the party and the Union Movement.

Under his leadership, the Labor Party has lost its spine. Worse still, it is in danger of losing its soul.

It has, in record time, abandoned its own policy platforms that were geared at restoring employee bargaining power, standing up for a progressive tax system, properly funding education and abolishing the undemocratic, anti-union Australian Building and Construction Commission.

Just when I thought Mr. Albanese couldn’t betray the Labor Party’s principles, workers and their families any further, he sided with the Morrison Government on new free trade deals with Indonesia, Hong Kong and Peru.

I ask Mr. Albanese, what has happened to a Fair Go for all Australians?

These agreements are a disaster for Australian jobs and living standards. Talk about sending a signal to unions and workers on where the party stands. And, it no longer appears to be on their side.

Mr. Albanese claims I have brought the ALP into disrepute. Notwithstanding my flaws, nothing has hurt the ALP’s reputation like Mr. Albanese’s leadership over the past 5 months.

It is no coincidence the smear campaign against me came just days after I announced that the CFMEU would no longer financially back the Labor Party.

The smears that followed initially centred on claims I denigrated family violence campaigner Rosie Batty, someone I admire deeply. I have denied these accusations from the beginning and have been supported by those at the National Executive meeting at which they were purported to have been made.

My personal life has also been dragged into this muckraking. I acknowledge that I have made mistakes in my marriage – which I have answered to in the courts – but using my personal life for political means is an incredibly low blow.

These personal attacks have caused me and my family enormous mental anguish at a time when we are rebuilding our lives together and addressing our problems.

Mental health is a very serious issue for many families just like mine. Instead of supporting my wife and I who have sought professional help to address these issues, Mr Albanese has used our personal life for political gain to expel me from the Labor Party.

And now he seems to have passed the baton to Labor frontbencher Mark Dreyfus, who has added criticism of former Labor Prime Minister Kevin Rudd to my alleged shame file.

I have been determined to fight their moves to push me out, given that false accusations were used to justify them.

But enough is enough. I can no longer ignore the personal toll, along with Anthony Albanese’s betrayal of working Australians and the values the Labor Party and Union Movement were founded on.

My focus right now, and that of my union brothers and sisters, is resisting the Ensuring Integrity Bill being driven by the Morrison Government. This is the same bill that, for good reason, failed under Tony Abbot in 2017.

If passed, it will leave Australia with the most extreme workplace laws in the world, restricting workers’ rights to seek fair pay and better working conditions by nobbling the unions that represent them.

This bill undermines the fundamental democratic right of union members to elect their leaders, handing power to the government and its big business mates to have union officials removed and unions shut down for even the most minor or technical breaches of workplace laws.

Despite this and the threat posed to the rights of millions of working Australians, the Labor Party appears to have gone missing in action in the fight to stop the Ensuring Integrity Bill.

My decision to resign from the Labor Party is simple but regrettable. I cannot remain a member of the party while Anthony Albanese is leader.