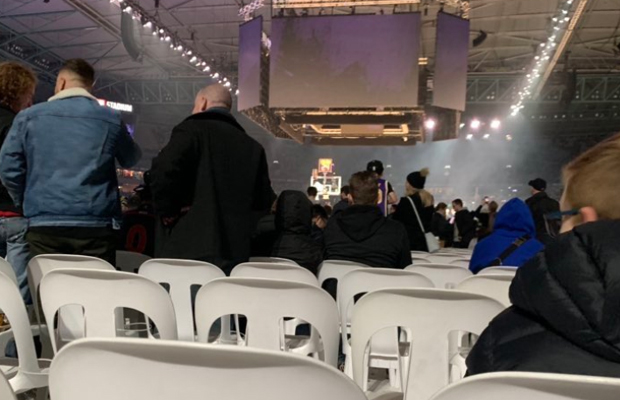 Basketball fans have been left fuming over the set-up at Marvel Stadium on Thursday night where Australia was taking on USA in a pre-World Cup friendly.

Some spectators needed binoculars just to see, others were forced to watch the TV screens to get a good view of the action, and others found themselves looking into the back of people’s heads with seats not elevated.

Even the VIP section was a let down for some, with Australian actor Russell Crowe saying people who decided to watch from home had made a “good decision”.

The seating problems came on the back of many fans already being annoyed about star players withdrawing from the game.

People paid hundreds of dollars for tickets and while 51,218 fans attended the much-hyped match, but many left disappointed.

“To have that sort of seating setup for that sort of game … it’s really unacceptable, especially at those sort of ticket prices,” ESPN basketball writer Steve Smith told Ross and John.

Team USA has since cancelled a scheduled media opportunity on Friday. No reason was given.

“USA Basketball looks forward to seeing media and fans when they take on the Australian Boomers at Marvel Stadium on Saturday,” officials said in a statement.

“Over 51,000 fans attended the event and it is worth noting the feedback to us has been strongly positive. Clearly there have been some fans that feel their expectations were not met on their purchased seats,” Basketball Australia and promoter TEG Live said in a statement.

“Of the 11,000 fans who had purchased floor seating to last night’s game, only 200 people were relocated. They were relocated promptly without issue and just two refunds were requested,” the statement continued.

Leigh Ellis, Former host of NBA TV’s ‘The Starters’, was at the game.

He says the backlash against last night’s seating has been blown out of proportion.

“If you paid 3 or 4 for a seat then you really should have done your research to check exactly where that seat was going to be and how it was going to look,” he said.

“We know that’s not an ideal stadium for hosting basketball, but this was a unique event.”

Press PLAY below to hear what Leigh Ellis had to say on 3AW Drive.

Click PLAY below to hear more on 3AW Breakfast.

Fellon told Ross and John she paid almost $300 per ticket and said all she could see was “a lot of heads” and had to watch the match on the big screen.

“There was no elevation,” she said.