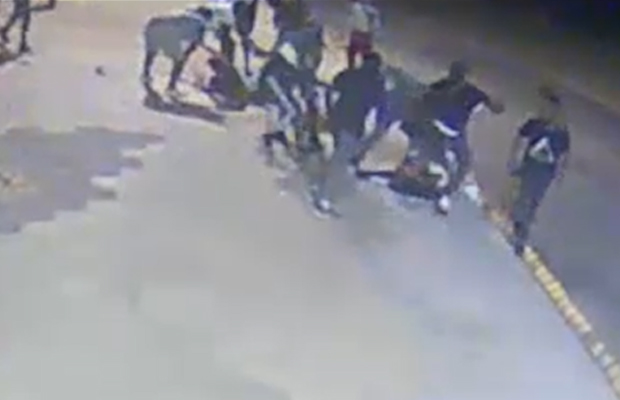 The CCTV has since been removed as a 17-year-old boy has been arrested and charged in regards to this incident.

The North Melbourne boy was arrested and charged with violent disorder, affray, five counts of assault, robbery and commit indictable offence whilst on bail.

He will appear at a children’s court on December 20.

A number of males are still wanted in relation to the incident as the investigation continues.

Police initially released shocking footage of the melee on the St Kilda foreshore, which shows an unprovoked attack by a gang of African men.

The attack, occurred about 11.15pm on Saturday December 1, when three men were approached by the gang.

The group allegedly began to assault the trio, punching and kicking them.

The victims attempted to walk away but continue to be hassled by the group, which was joined by a number of other males.

The footage shows a 24-year-old man being punched a number of times to the head.

Then, once he is unconscious lying on the ground, his mobile phone and wallet were taken from him.

The second victim, a 26-year-old man, tried to intervene and was kicked in the head, becoming unconscious.

The mother of one of the victims, Raffaela Piskopos, told Nick McCallum something needs to be done.

“The police, the government need to do more about this,” Ms Piskopos said.

“This problem has been escalating, we all know that.

“He actually hailed down a police car,” she said.

“They stopped for long enough for him to ask for help.

“Unfortunately they said they had better places to be.”

Senior Constable Nathan Sheppard, from the Port Phillip CIU, told Nick McCallum those involved are believed to be both teenagers and men in their 20s.

“As they approached the Catani arch, a large group engaged in a vicious and violent attack on the victims,” Snr Constable Sheppard said.

“There has been hours and hours worth of trawling through the CCTV, we’re now at a stage where we can release these images.

He said he believes the group are not from the Port Phillip area.

“My feeling Nick is they are from outside our area, otherwise they would be somewhat known to us,” he said.

Neil Mitchell spoke with the father of one of the men last week, who was unhappy with the police response to the incident.

“He was out cold and they took his phone, his wallet and his shoes,” he said.

“My son was lying on the ground for almost an hour before the police came.”