Multiple swastikas have been painted at the top of the Nylex silos in Cremorne.

The defacing is the latest incident in a recent burst of antisemitism across the city.

Eight of the symbols have been painted on the sign in total.

Greg said the vandals have gone to a lot of effort to paint the offensive symbols.

“It looks like they’ve gone over the top and hung themselves over the edge,” he said.

“We’ve had a rash of terrifying swastika vandalism over the last few years,” he told Neil Mitchell.

“There is a tsunami of hatred, of antisemitism, which is staining our streets.

“Think about the holocaust survivor. For them to see the swastika, which is the absolute emblem of inhumanity … it’s as threatening as being confronted with a gun.

“It tears a hole in their heart.”

3AW Mornings contacted the Yarra City Council and Caydon, the developer of the Nylex site, about the graffiti.

“Caydon is aware of and disgusted that vandals have graffitied parts of the Nylex site with swastikas. We are arranging for them to be covered up or removed as soon as possible. Despite security measures in place vandals occasionally gain access to the site,” the developer said in a statement. 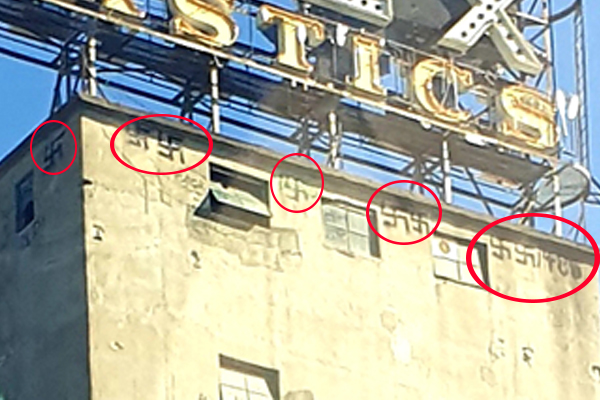