The huge Australian fur seal spotted by many at Black Rock in recent weeks has died.

Melbourne Zoo had been monitoring the seal for several weeks.

Initially the huge seal, estimated to have weighed 140 kilograms, was thought to be healthy.

“We had a local wildlife carer look at him, he looked okay, we thought he might be okay,” Dr Sarah Frith, veterinarian at Melbourne Zoo, told Neil Mitchell.

But his condition declined rapidly.

“Last week he was looking like he was losing body condition, losing weight, and just becoming a bit more depressed,” Dr Frith said.

“This week we were getting reports that his left eye was closed and he was squinting as though it was painful, streaming tears.”

“Unfortunate he had a really nasty injury to his left eye, was definitely blind in the eye, and it was clearly painful. That injury meant that he was unable to forage properly,” Dr Frith said.

The decision was made to euthanise the seal.

Veterinarians estimate the seal may have been up to fifteen years old, the upper end of the age expectancy for a seal in the wild. 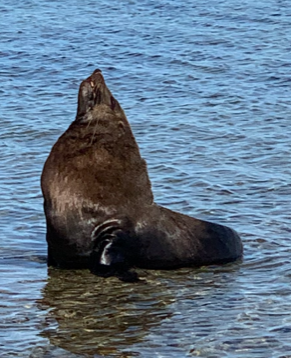