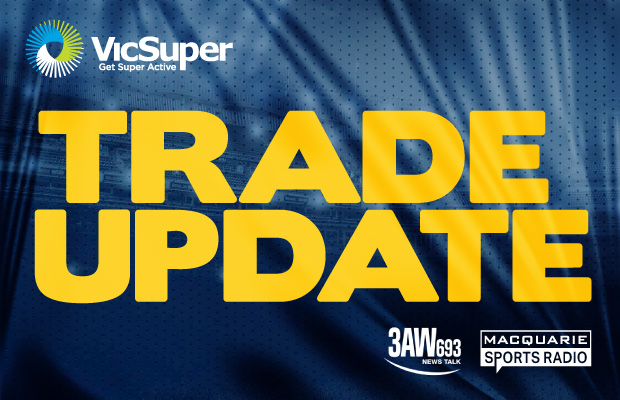 With thanks to our good friends at VicSuper, here’s the latest Trade Wrap Headlines and Podcast

Mitch Cleary believes star GWS midfielder Dylan Shiel will clarify his future in the next 24 hours.

He told the Trade Wrap it’s down to two clubs.

“It’s either Carlton or Hawthorn,” he said.

He said Essendon and St.Kilda are out of the race to secure the in-demand 25-year-old’s services.

Could Hawthorn be making a play for Chad Wingard?

Mitch Cleary believes Alastair Clarkson has been on the phone to the Port Adelaide star “every year” in an attempt to lure him to the club.

“They were together in the International Rules a couple of years ago and Wingard has long been a fan of Clarkson.

“If (the pursuit) of Dylan Shiel falls over, they could increase their offer.”

Tim Kelly not a done deal at West Coast

The star Geelong onballer has nominated West Coast as his preferred club but Fremantle’s trade currency may trump that, according to the newsbreaker.

“The Eagles seem like they’ve got all the running on Tim Kelly but I wouldn’t be surprised if Fremantle swoop late,” he said.

Bulldogs set to hold Marcus Adams to his contract

Western Bulldogs are intent on keeping wantaway defender Marcus Adams and will hold him to his current contract.

The 25-year-old requested a trade to Brisbane but Dogs GM of List and Recruiting Sam Power is set to play hard ball with Adams, who still has two years left on his contract.

Jarrad Waite told the Trade Wrap the Lions are becoming a destination club.

“The way they’re playing at the moment is very infectious and there’s word coming out that they’re an exciting club to be at.”

West Coast midfielder Andrew Gaff has resisted the lure of a big-money offer at North Melbourne to re-sign with the Eagles in “2019 and beyond”.

The star onballer was visibly upset in the aftermath of West Coast’s premiership celebrations and reportedly was in two minds whether to re-sign or take up the Roos’ multi-million dollar offer until making a decision over the weekend.