A much loved great-grandfather has been identified as the first victim of the bushfires in East Gippsland.

Tragically, the body of 67-year-old Mick Roberts was found in his Buchan home.

His niece Leah Parsons took to Facebook to say her uncle had been painting his house before the fire hit.

There are fears for three other people who are still missing.

Residents in Victoria’s east are assessing the damage caused by bushfires today, but communities remain on alert, with fires continuing to burn.

“This is a complex set of fires and the coming days and weeks are going to be very challenging,” he said in a press conference.

Mr Andrews says all necessary steps have been taken to ensure those affected by the fires can now access grants to assist them through this difficult time.

Emergency Services Commissioner Andrew Crisp says the disaster is far from over.

“What we’ve seen over the last 24 hours is a significant number of lightning strikes up in the Alpine region,” he said in a press conference.

“Across the state at the moment, the last time I looked, we had more than 45 going fires, with a lot of those being those new fires in that part of the state.”

Mallacoota resident Jack Bruce said most of the town lost their homes in yesterday’s inferno.

“The majority of people here have lost their houses,” he told 3AW’s Darren James.

“My mum lost her house, my best mate lost his house.”

Mallacoota residents are today assessing the damage caused by the inferno that swept through the town yesterday.

Mr Bruce described the shocking scenes he saw when he went to check on his dad, who was trying to protect the family home.

“This front of cloud that I’ve never seen before, literally like Armageddon, was coming across the sky. It just engulfed the whole town,” he said.

“The forest was completely engulfed, I was going through a tunnel of fire.

“My aunty’s house, next door, with my cousins, where they used to live, was completely obliterated.

“Flames 50 to 100 metres high were blasting across to our house.”

3AW reporter Pat Mitchell, at the State Control Centre in Bairnsdale, said the scale of the crisis is staggering, with one fire burning at least half a million hectares of land.

“It was likened yesterday by an incident controller as East Gippsland’s Black Saturday.”

Many are still stranded, including a large number of people on the beach at Mallacoota.

The military and navy are proving aircraft and ships to assist crews battling the blazes and help communities.

“Having that extra assistance is going to be invaluable,” CFA Incident Controller Luke Heagerty said.

“We need to work out throughout the next day what we can do to help those communities.” 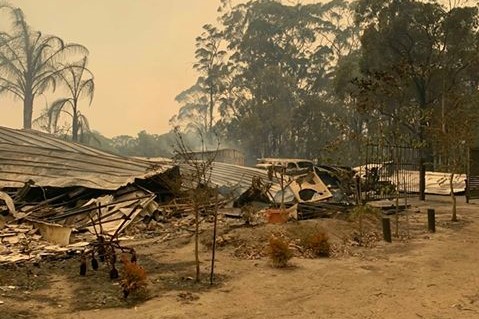 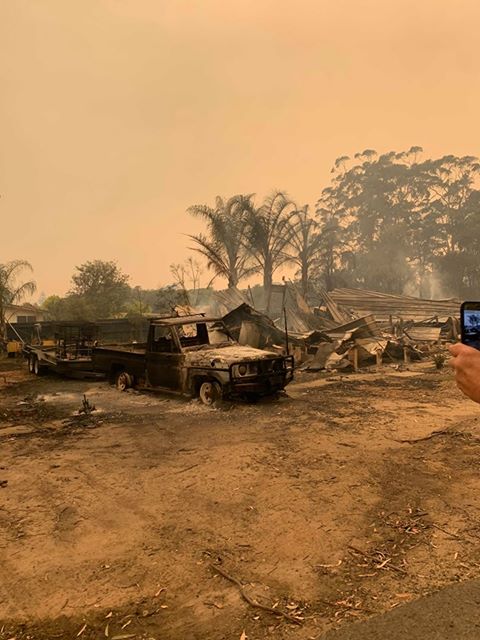 The Australian Defence Force is providing aircraft and ships to assist and bring vital supplies to stranded residents and holiday-makers.

Fallen trees have blocked many of the roads in the area, and electricity is disrupted in many locations.

The Princes Highway is closed between Orbost and the NSW border.

Mallacoota resident Maisy says she doesn’t know how the community will recover from the fires.

Thousands are still sheltering at the beach in the popular tourist town.