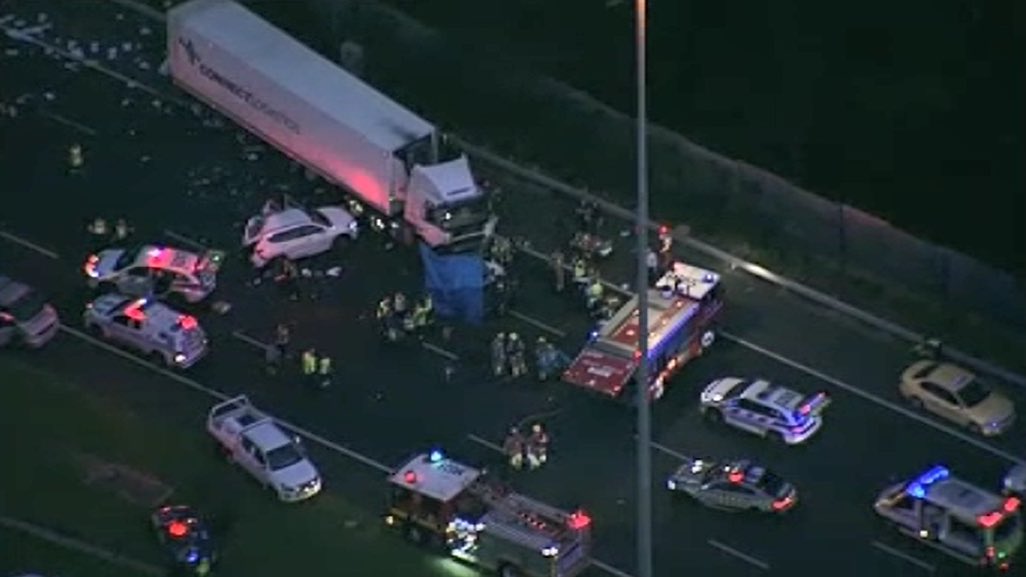 The identities of the four police officers killed in a horrific crash on the Eastern Freeway last night have been revealed, as it emerges that the driver of the Porsche involved was on bail for assault and theft charges when he was pulled over by police.

Leading Senior Constable Lynette Taylor, Constable Glen Humphris, Senior Constable Kevin King and Constable Josh Prestney were killed after being struck by a truck while conducting a roadside breath test on the driver of a speeding Porsche.

Mortgage broker Richard Pusey has been identified as the driver of the Porsche, which was clocked at 140km/h.

He allegedly fled the scene after the crash, but made contact with Victoria Police overnight before handing himself in this morning.

Mr Pusey was on bail at the time of the tragedy and was due to appear before Collingwood Neighbourhood Justice Centre later this month.

Mr Pusey is due to face court today on a string of charges.

Police Chief Commissioner Graham Ashton confirmed the Porsche driver had tested positive to drugs in the lead-up to the accident and, in a staggering revelation, said he took photos from the fatal scene after the crash which later appeared on the internet.

“It disgusts me,” Mr Ashton said.

Meanwhile, the driver of the truck that careered into the police, a Cranbourne man with no significant police record, remains in hospital but police hope to interview him this afternoon.

The circumstances of the crash are still not clear. Mr Ashton said the truck veered into the emergency lanes.

It is believed to be the largest loss of life in the one incident in the history of Victoria Police.

“It is a very tragic night,” Police chief Graham Ashton said from the scene last night.

Click PLAY below to hear more from Graham Ashton’s press conference on 3AW.

The Police Association said it was “shocked and immensely saddened” by the news.

“This is a brutally sad reminder of the danger police face in the course of their service, every minute, of every shift.

“We mourn their loss, we grieve with their families and colleagues and we will never forget them.”

Horrendous crash on the Eastern. Police casualties . The force will need support as a group . They hurt as one when something like this happens

‘A dark day’: Chief Commissioner reveals one of the officers killed in freeway horror was still in training