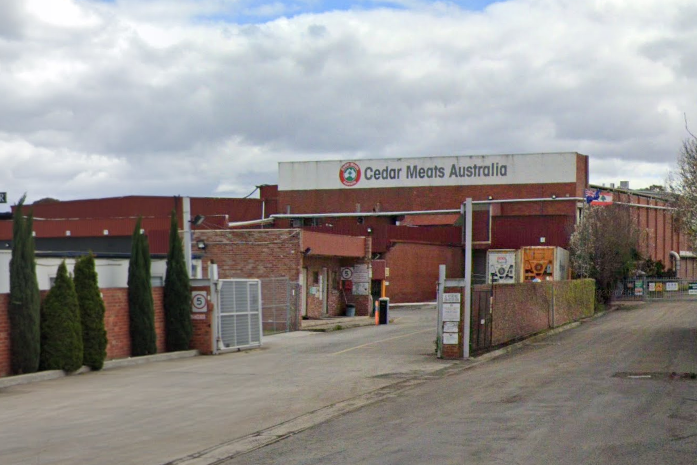 The state government has come under fire for its decision not to name the Melbourne meatworks linked to 34 cases of coronavirus.

The abattoir in question, Cedar Meats, has come forward to identify itself as the location of the cluster today, but transport industry advocates say the location should’ve been made public sooner.

Victorian Transport Association CEO Peter Anderson said truck drivers who visit the facility should have been told about the cluster.

“Absolutely it should be named,” he told 3AW’s Neil Mitchell.

“We’ve got drivers that are going there delivering sheep, and calves, and those taking out product at the other end of the factory that need to know how they should engage with people.

“Delivering animals takes about an hour, an hour and a half, depending on the size of the truck.”

Victorian President of the Livestock and Rural Transport Association, John Beer, said he fears truck drivers may suffer as a result of the cluster.

“The other abattoirs will be putting the question out in front of all the drivers to ask whether they’ve been to Cedar Meats, and I can bet you any money you like they wouldn’t want anyone who has been to Cedar Meats going into their abattoirs,” he told 3AW’s Tom Elliott.

When questioned about the state government’s failure to name the abattoir at the centre of the outbreak, Chief Health Officer Brett Sutton said it was up to the facility to identify itself.

“It’s not for us to declare that it’s a particular setting,” he said.

“If the meatworks wants to name itself to be clear that it doesn’t involve other places, then they’re free to do so.

“Naming it is not part of what’s required for us to do our work.”

But Neil Mitchell said the community deserves to know where clusters have been detected.

“It’s extraordinary that they try to keep this quiet,” the 3AW Mornings host said.

“It has connections right through the community. That’s the whole point in a cluster, it can spread via very casual contact.

“We must have transparency in this situation, we must.”

The abattoir has released a statement confirming it is the location where a coronavirus cluster has been detected. The facility is now closed for cleaning.

A number of our employees have tested positive for coronavirus in one of our facilities in West Melbourne.

The welfare and safety of our staff, visitors, suppliers and customers is our highest priority.

All workers are self-quarantining and we are working closely with the Victorian health authorities.

Neil Mitchell has revealed the location of two prior outbreaks when the government was reluctant to do so.

The Albert Road Clinic cluster was confirmed by the state government after the location was named on 3AW Mornings. Professor Sutton revealed the cluster at aged care facility, Hawthorn Grange, after Neil Mitchell learnt of the outbreak.

Press PLAY below for more from Neil Mitchell.

Press PLAY below to hear what the Livestock and Rural Transport Association’s John Beer had to say to Tom Elliott.