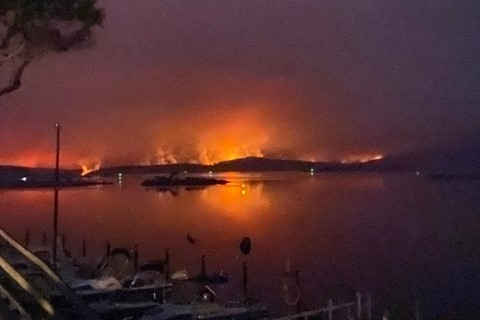 The bushfire threat continues in Victoria this morning, with communities north of Mallacoota still at risk.

Fire authorities have sent reinforcements to Cann River, with fires burning to both the east and west of the community.

The town is currently blanketed in smoke, and under ember attack.

Overnight, active fire continued to burn in the Genoa area, north of Mallacoota.

One person has been found dead, and there are grave fears for at least three others who remain missing.

The body of 67-year-old Buchan great-grandfather Mick Roberts was tragically found in his burnt out home yesterday.

Many remain stranded, with roads cut off, but those stuck in Mallacoota should be able to leave today, if they choose to go.

Two naval vessels, HMAS Choules and MV Sycamore, have arrived in Mallacoota, along with a container ship with vital supplies.

It’s unclear how many people will be evacuated from the town aboard the ships, which will transport them to Westernport, on the Mornington Peninsula.

Black hawk helicopters are transporting fire fighters from Bairnsdale to Mallacoota, and getting the sick and vulnerable out of Mallacoota.

Helicopters have rescued six elderly and sick residents from the town. Two of them were taken to hospital after landing at the RAAF base in Sale.

Dozens of homes have been destroyed in the popular tourist town after fire ripped through the community on Tuesday morning.

Conditions are predicted to worsen on Saturday, prompting fears that more communities may be impacted.

Tourists who are holidaying in areas of East Gippsland which are still accessible by road are being advised to leave while the still can.

The Princes Highway is currently open from Bainrsdale to Orbost.

“This is a complex set of fires and the coming days and weeks are going to be very challenging,” he said in a press conference yesterday.

In New South Wales, a tourist evacuation order has been issued for those in the area from Batemans Bay to the Victorian border. Holiday-makers are being urged to get out by Saturday.

The Incident Control Centre is now being run out of Orbost. CFA crews are here from right across Victoria. Just saw crews from Berwick, Carrington Downs and Mornington. #gippslandfires @3AW693 pic.twitter.com/N9TUU6wF7Q

In Cudgewa, near Corryong, an estimated 15 homes have been destroyed.

Josh Collings lost his home, but says he doesn’t regret his decision not to stay and defend his property.

“The fire came over the mountain, then we heard our house had been totally destroyed. It’s actually burnt so much there’s not really even a roof left,” he told Red Symons, filling in for Neil Mitchell.

“We made the right decision every step of the way, to get out of there.”

How you can help the victims of the Victorian bushfires

Young Sarsfield couple get engaged after fire destroys their home